Something not yet mentioned on this blog is that I don’t only eat lots of food, but I also cook it… or at least I used to. There was even a time when I hoarded cash to open a Thai restaurant in the UK but I instead spent it buying my condo in Bangkok. While I do love Thai food, I love living in Thailand a lot more. Plus I doubt I could ever hack it in the kitchen. It was around 2004 when I first started cooking (a time when I could barely boil pasta) and Thai food quickly became an obsession for me as I rushed to the local Asian supermarket to be first in line every Friday for the fresh arrivals of Kaprao (holy basil). Now living in Bangkok it is more of the opposite where instead of cooking Thai food I will rustle up a pot of my mum’s stew or other home comforts. No doubt my passion was always in eating, rather than creating and now in the kitchen my flare, or even prep, doesn’t cut it with Fanfan’s standards (think Gordon Ramsay but louder). Anyway, this is all irrelevant as again I didn’t cook this food, this was all Fanfan. But I’d just like to say…. I could cook all of these, give me a chance in the kitchen and I could replicate any Thai dish. It might taste horrible to everyone else, but I’d still eat it… and reheat the leftovers the following morning. Note, I am new to Thai fried fish dishes so this was all new to me. 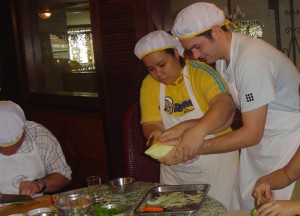 Eating Out is Cheaper?

This month we’re based in Thailand scraping by on a less than healthy budget. This means eating options are limited and we generally just stick to our local street food and shop house restaurants. Our lunch will generally cost less than 100 Baht which is not so different to dinner, or any meal. We spend roughly 100 Baht on each meal locally. However, this tends to be quick soups or stir fry dishes with less than generous portions of meat; chicken or pork (Tom Yum Kai and Kaprao Moo Grob the usual culprits). For fish dishes they tend to be more tricky and expensive. We therefore decide to cook our own. We order some fresh fish and ingredients from Tesco delivery (yes Tesco deliver in Thailand, and yes we are that lazy). We throw together three fried fish dishes. For three fish (Pla Nin / Tilapia) it costs 83 Baht and to round up the rest of ingredients it would cost around 150 Baht. For the 3 meals we pay around a grand total of 230 Baht ($7). We do save a little from our usual street food meals but when you factor in delivery and the inevitable waste, the costs will likely even out. Eating out is generally cheaper in Thailand. Anyway we throw together three simple Thai fried fish dishes. We won’t give exact measurements here as we don’t have them. Cooking Thai food comes more with instinct and tasting, just throw it together and see how it goes. Clean, gut and cut the fish then fry in a shallow (or deep) pan of cooking oil. The Nam Jim chilli dip is mixed on the side by a quick pummeling of garlic and chilli in a mortar and pestle mixed a splash or 3 of soy sauce and lime juice. Add a garnishing of chopped coriander. Serve, simple and delicious. Note, we do use a lot of chillies in every dish. Clean, gut and cut the fish then fry in a shallow (or deep) pan of cooking oil. . Leave to the side and start preparing the stir-fry sauce. The Pad Cha fuses a mix of fingerroot (like a mild ginger), kaffir lime leaves, garlic, chillies and the all important peppercorns. It is cooked in soy sauce and oyster sauce before serving over the fried fish. Clean, gut and cut the fish then fry in a shallow (or deep) pan of cooking oil. The sauce is prepared on the side heating coconut milk and stirring in the chu chee curry paste and thin slices of kaffir lime leaves. Garnish with more chillies. Chu chee curry paste is a little tricky to track down so an easier alternative uses the generic red curry (Kaeng Phed) or even Panaeng curry paste (Kaeng Panaeng). The Chu Chee curry tends to be milder and more sweet than the others and can also be found served with