The quickest, most convenient route when driving to Doi Angkhang from Chiang Mai is from Fang district, a route which is well known for its very steep and windy climb. Before setting out we were told by pretty much every local not to try it, and that our car wouldn’t make it, so obviously I take this as a challenge. And, to be fair, I didn’t do too bad. I made it halfway up at least from the temple at the turn off from Fang, where it is a 25km hike to the top of Doi Angkhang. But the steep climbs don’t really start until the last 15km, and we made it to the last 10km, so maybe not. I did pass one of the so-called ‘hard parts’ and, while I did get stuck on a couple of climbs, I did manage to force our way to the top by a bit of zigzagging. But, in the end, I did lose on the 2nd ‘hard part’ where after a seemingly endless climb, I lost all momentum, and came to a complete standstill just before a ridiculously steep hairpin bend. I had no alternative but to turn back to the bottom again. But, while most people complained about the hairpin bends and the strain on their breaks on downward slopes, it was just the sheer strain on the slopes which beat us. So, from the bottom, we considered a taxi to Doi Angkhang where at the temple on the turn in from Fang, there is a songtaew taxi terminal. We were offered a driver for a tour of Doi Angkhang, along with pickup and return from our hotel the following morning, for 2,000 Baht. A decent price, I guess, but I don’t like to lose. So instead I drive back to Chiang Dao, which is where we had previously arrived from, the day before. This means driving 80km back again. 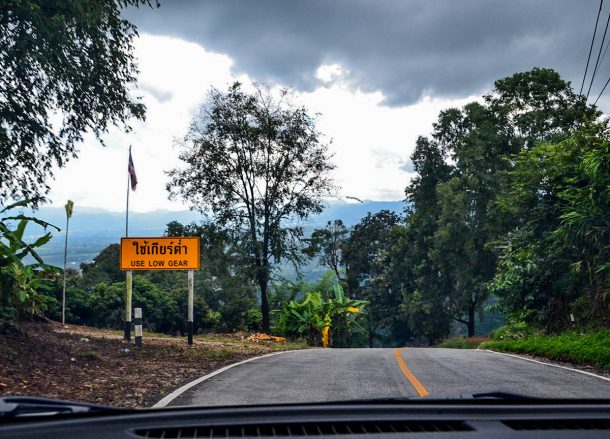 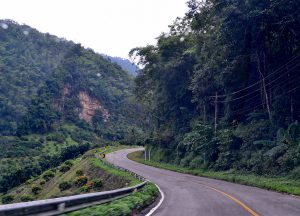 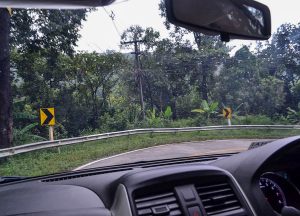 The Scenic via Chiang Dao

While both routes to Doi Angkhang from Chiang Mai are similar distance, the route through Fang is thought to be quicker and more convenient as it follows mostly main roads and carriageways until the final climb. The alternative route, straight through Chiang Dao, is instead a lot more off-the-beaten-track. There is roughly 35 kilometers of hilly terrain with constant ups and downs which to be honest is a really fun drive. But our car does still struggle along the way and stalls on occasionally slopes. To beat one slope I had to kick Fanfan out with her friends and make them walk to the top. But this drive is by far the more beautiful route with pokey Chinese villages, hill tribes and beautiful mountain views. There are also plenty stops and viewpoints along the way. The only problem we had was that we started this day late, and I was a little bit hungover following a jolly night on the riversides of Tha Ton. So, when we do finally come close to Doi Angkhang, the darkness sets in and it becomes foggy, as we’re literally in the clouds. It was also rainy season so the wet slopes didn’t help. Admittedly it was a little bit terrifying but this is more because of never being sure if we’d make it up the next slope. We could have been forced to turn back at anytime and, even then, we were never sure if we’d make it back up the hills on the return journey. Potentially, we could have been stuck between two slopes for the night. 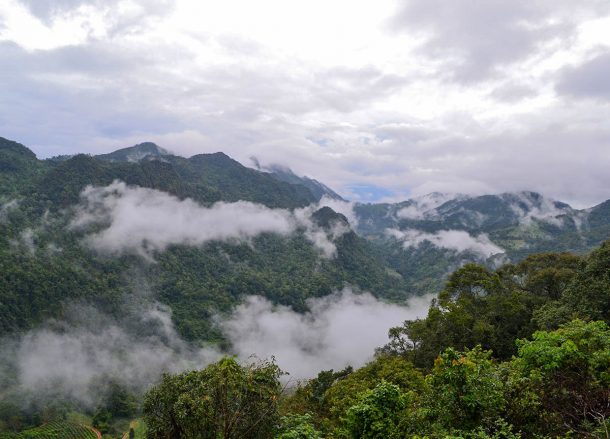 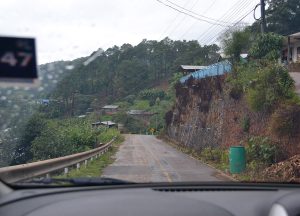 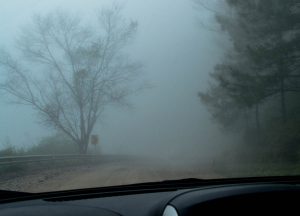 We actually knew from the start that we had little chance from Fang where, even on simpler journeys through Chiang Dao and Mae Rim, we were having similar problems. This is because the car we were driving was pretty much the worst car possible. I was driving a Nissan Almera with a 1.2 liter engine and automatic gears. For a start, automatic cars are crap, as you obviously don’t have control over gear changes. But, at 600 Baht per day, it was the cheapest intermediate car for hire from Chiang Mai airport. And, while it does look more capable than many cars, the engine size is the same as the cheapest compact car. At the same it’s obviously a lot bigger and heavier and has to pull a lot more weight up steep slopes. Add in the three passengers, and their luggage and of course it’s going to be  hard slog. People recommend at least a 1.6 engine when driving to Doi Angkang, but I feel 1.4 is good enough. If our car were just that little more powerful, it would all be so simple, and fun. But we were just before the threshold. The only thing we did have going for us was that the car was new, more or less in its wrapping, with few more than 800km on the clock. This means we had no worries about blowing the engine or failing breaks and this is what the real dangers are in the drive. So be sure that the car is in good nick before driving to Doi Angkhang, and full of petrol. 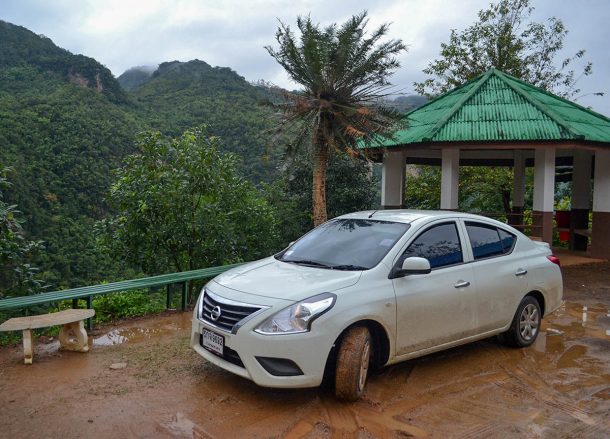 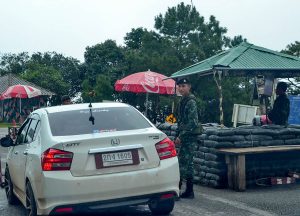 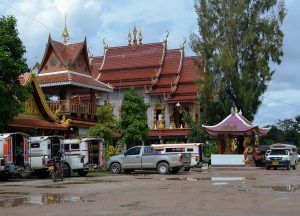 My advice would be to give plenty of space ahead and to avoid other cars. They’re both relatively quiet roads anyway. Also, given I was never certain whether or not I’d make it over the next slope, I would drive into climbs like a rally driver. I would build up speed on the down slopes, and take corners like a madman, as I do my best to keep momentum, before taking on the next steep climb. Then, as soon as the road signs show with a lorry on a slope, and an 8% climb next to it, my pedal hit the ground and stayed there to the top. If you feel the car is slowing it is best to snake across both lanes to cut into a straighter climb. Again, there isn’t much traffic on either side so it’s safe enough. Another bit of local advice, which I was told when found stuck on a slope, is to turn off the air-conditioning as apparently this takes up engine power. Also, if the locals warn against the journey, they may be right. And, in worst case scenarios, kick out your passengers, with all the luggage, and make them carry it to the top. Or just turnaround and take the taxi option from the temple at the turn off from Fang. 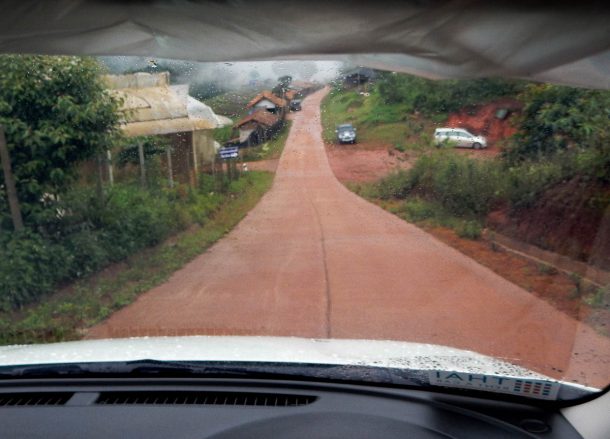 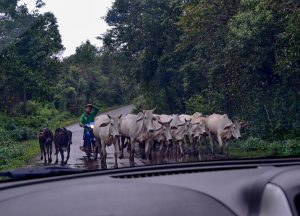 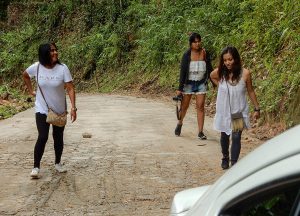