As an advocate for Thai street food and food tourism, this is a post I don’t like to share, but it is also necessary. It is something I am asked a lot about. Is street food safe in Bangkok? Through years of experience, I can say explicitly, yes, it is safe, but you do need to be careful. More so for the newcomer. With more experienced travellers to Bangkok, locals etc, there has been a built immunity to the ugly organisms which can bring illness and food poisoning, and this is no different to any border crossing.

Even in my younger years of travel, crossing the English channel to France, I would have been constantly wary of potential illness from water and foods. Of course Thailand is a slightly larger leap, and therefore more precautions will be needed. So I ‘ve been travelling to Bangkok since 2002, and I now live here permanently, since 2011. On any given visit or, now in daily life, I would eat street food at least once which is more than any other foods; food courts, international restaurants or fast food. To date I have had food poisoning, or severe TD (Traveller’s Diarrhea), on two occasions. I’ve had ‘the runs’ on many occasions, but these were seemingly harmless bouts, where I had little to do more than stay close to the bathroom. So I’m obsessed with street food, and while it wasn’t the reason I first came to Bangkok, it is one keeps me here. I live for street food in Bangkok. 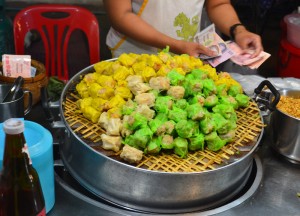 My Own Experience with Food Poisoning

To date my worst experience with food poisoning was back in 2004, and while I don’t want to blame my street food Som Tam (papaya salad)… I feel everything was pointing to it. Through the entire ordeal it was all I could think about. That Som Tam. So I had eaten street food Som Tam during the day, a relatively new dish to me, and it was followed that night with restaurant food, and quite a bit of alcohol. It’s unlikely that beers had much of an effect (here for my obsession with alcohol in Asia) but I’m sure they didn’t help. So come the middle of the night I am continuously toing-and-fromming the bathroom with ‘the runs’. Not long after I was, as they’d say in my home country ‘boking my guts up’. Then it was ‘coming out both ends’… at the same time. For days I would lie in the fetal position, feeling closer to death than ever. Friends tried to force me to hospital but I refused. I couldn’t bare the thought of leaving the hotel floor. For the ordeal I preferred sleeping on floors because the added discomfort took away from the more obvious discomfort of the poisoning. After two days I am forced to leave the hotel having cancelled my flight home and overstayed my welcome at the now fully booked hotel (where I ate the night of my food poisoning). I had no option but to leave. So I go from fetal position in the hotel lobby, to fetal position in the back of a taxi, to fetal position in the next run-down hotel lobby. When you feel that bad it makes little difference how you look in public, I could have been naked for all I cared. So I secure a new room at a not-so-far hotel and for two weeks I work to recover, on my own in the dark. In normal cases food poisonings last around 3 days, so what I had was likely more serious and possibly life threatening. Fortunately, in two weeks time I was on my rescheduled flight home with a sick bag on my lap. Research shows ‘despite theoretical risk the incidence of street food contamination is low – not higher than in restaurant foods‘ and through my own experiences I have found similar. Since my first food poisoning I’ve had bigger scares with non-street food than I have with street food, yet I eat a whole lot more street food than others. With food courts I once got a dodgy stomach from mishandled mayonnaise. A second bad food court experience was mango sticky rice, where I cut into my sticky rice to find a bug staring back at me. Then there’s my local pizzeria, a relatively fancy establishment, where I once found (after two slices) that my dry chilli sprinkles were moving. When I inspect the chilli shaker I find a nest of bugs living inside (not pictured below). So in short I’m saying, it can happen anywhere, in any country, with any food, at any establishment, and it is best to be wary of this. How to Stay Safe?

You need to be aware that locals, expats, travellers and foodies are likely to have built immunity to the ugly organisms found in food contamination. Also be aware that most incidents of ‘Traveller’s Diarrhoea’ comes from water, ice-cubes, brushing teeth and water washed fruits and salads. Water tends to be the bigger problem. Here are some quick tips to stay safe with street food in Bangkok:

Follow these simple rules and you will significantly cut the risk of food poisoning and Traveller’s Diarrhoea. Check here for our guide on street food and cheap eats in Bangkok.