We opt to go it alone for the Chongqing to Wulong Karst day tour and while there were relatively cheap day tour options available (350 Yuan pp with our hotel) we much prefer exploring independently. Almost always we will choose independent travel over day tours not only because it is cheaper, but because it makes the tour more flexible and avoids the buses crammed chock-full of tourists and backpackers. Note, we are far from proficient with travel in China and know little more than Nihao and Xiexie in Chinese, but we get by easily by pointing at pictures. (Here for our long distance travel in China guide). So English speaking is next to none in these parts of China and during our day tour to Wulong Karst we see no other international travellers (a few domestic). In the end our self penned Wulong Karst Day Tour was surprisingly simple given the entire route is well connected with next to no walking between stops. We also get to visit some less explored local spots for authentic and Chinesey experiences along the way. 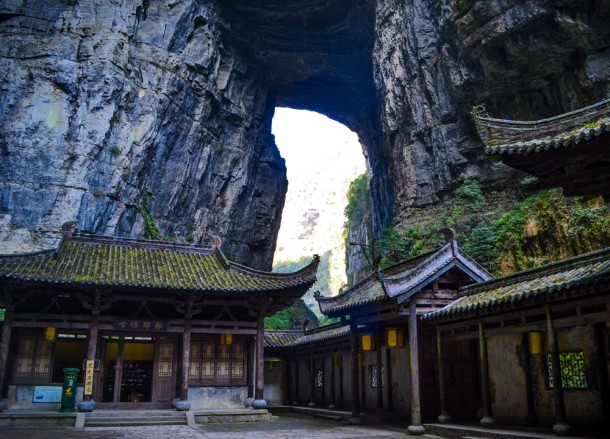 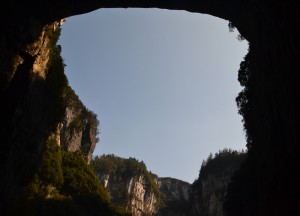 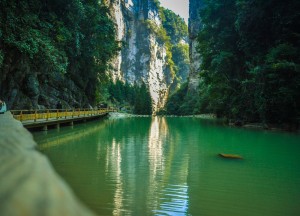 The total cost of travel was 235 Yuan pp as broken down here; 95 (entrance) + 120 (60 Yuan bus x 2 ways) + 16 (8 Yuan minibus x 2 ways) + 4 (2 Yuan subway x 2 ways). Note, this price was during low season so expect higher entrance fees to Wulong Karst during the busier tourist seasons. Our Wulong Karst day tour starts early morning leaving our hotel in Chongqing city centre. We stay near Jiaochangkou metro station (CRT) using the metro to reach the bus station and leave at around 7:00am. The journey takes just over 20 minutes as we arrive to the bus station in time for the 07:30 departure from Chongqing to Wulong. The bus station is easy to reach using the metro and can be found with just a couple minute walk from Sigongli station. Line 3, Exit 4, walk left and continue straight for two to three minutes). 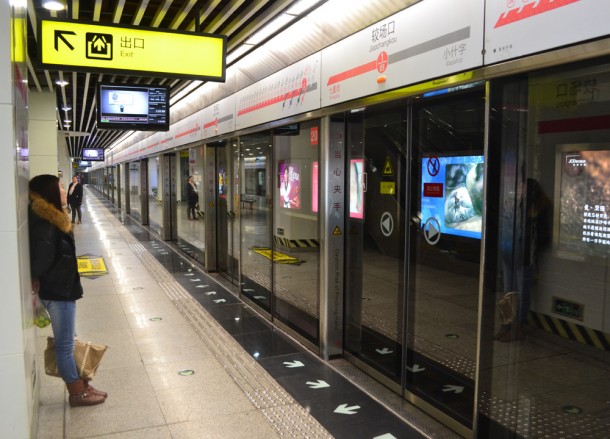 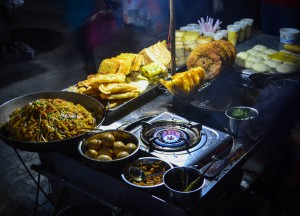 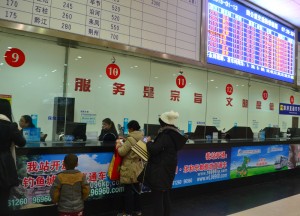 At the bus station we go first to the ticketing offices and ask for the bus to Wulong. Here we show the picture of Wulong Karst to make communication easy. The ticket is issued and we make our way to the nearby departure gates. Below I have added a quick pic of our ticket on the day with some added English translation to make things easier. The price was 60 Yuan and the gate number is 7. The bus departs on schedule and for the next hour we plod along in busy traffic. I think tailbacks are the norm for these hours of the morning, and are inevitable if you plan to make the most of your Wulong Karst Day Tour. The scenery along the way was clouded in mist so we don’t actually realise the picturesque scenery until our return journey. It’s nice in these parts. Just past half-way from Chongqing to Wulong we stop for a pit stop giving just enough time to grab snacks and sprint to the bathroom. It felt rushed. We soon arrive to the Wulong town bus station at around 11:00 and the journey takes just over 3 hours. 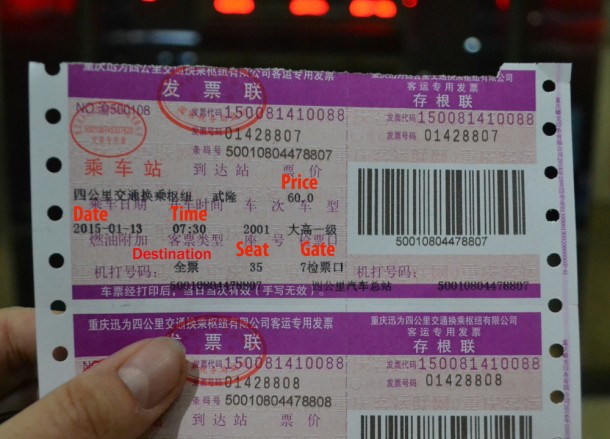 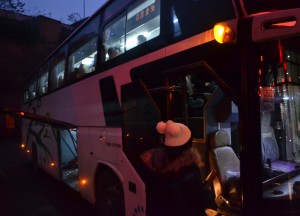 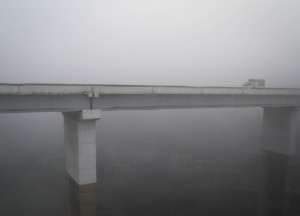 The drop off at Wulong Town is on opposite side of the road from the bus station, next to fresh fruit markets and one or two taxi and hotel touts who will lightly pester you. Ignore them and cross the road to opposite and the bus station. Again we go first to the ticket offices, walk to the window, point to a photo of Wulong Karst and they hand us bus tickets (8 Yuan pp). We pass the security, out to the buses, show the ticket and are squashed into a smaller minivan with a couple of domestic travellers and the rest of Wulong locals. The route then follows more mountainous terrain past small villages and settlements in the area. The journey takes roughly 40 mins arriving to Wulong Karst National Park at around 11:30am. The drop off is at the side of the road next to the front car park of the visitor centre. 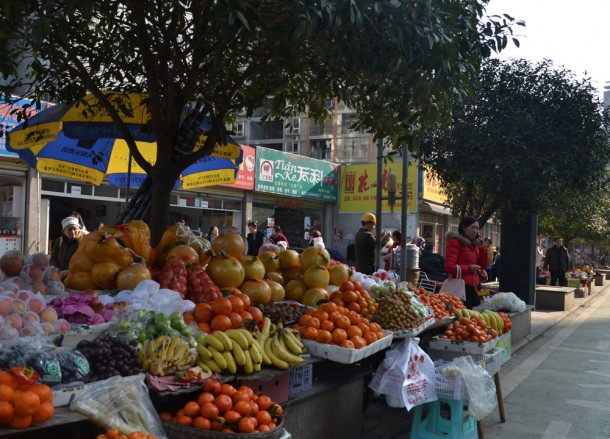 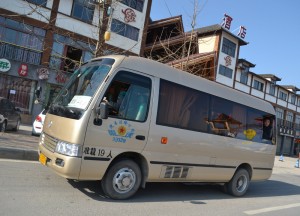 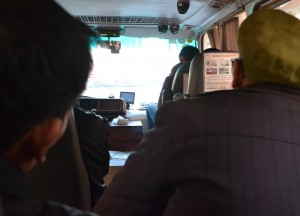 The triangular building is hard to miss and from the bus a quick walk through the car park finds the front doors of the visitor centre and ticketing offices. For us it was quickly made obvious that few foreigners ever follow this route. Stepping off the minivan a policeman come over to greet me with a hi and eager smile. Next a group of tourists shout over and wave to me. Once into the building we find no-one else in the queuing so it was quick to pay for our tickets (95 Yuan) and we can quickly forward to the next resort bus. This bus brings us to the start of the Wulong Karst treks where we are greeted by a giant model of Bumblebee. Wulong Karst was the filming location for some of the Transformers: Age of Extinction movie scenes so expect reminders along the way. After a short walk from the Bumblebee statue we descend the cliff walls in a towering glass elevator (price included in the ticket) bringing us to the bottom of the ravine. The scenes from here on, are sincerely impressive. 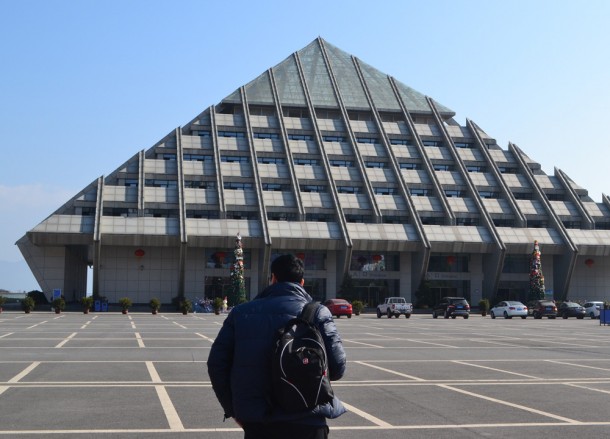 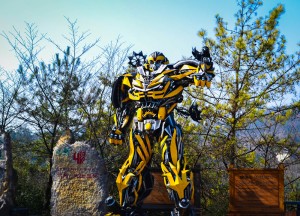 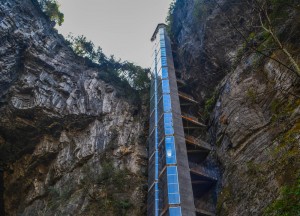 Have you ever watched ‘The Land Before Time’ at the end where Littlefoot stumbles on the secret world of dinosaurs. Wulong Karst feels a bit like this only less animated and less dinosaurs (although there are some). It’s like a huge, deep valley which can only be reached through a towering crevice. They promote it as the centre of the earth which works well. Arriving by elevation there is then a stepped slope which leads down to the lowest levels. The first outpost is the highlight for many, a traditional Chinese building set under the tower cliffsides of the Karst. A great photo-op. From here the walk then follows 3km along rivers, caverns, bridges and beautiful scenery. We arrive to the end already staggering (we’re not the fittest of travellers) and take the optional buggy (15 Yuan) on to the finish line. There are alternative treks and attractions in the area but we give them a miss. 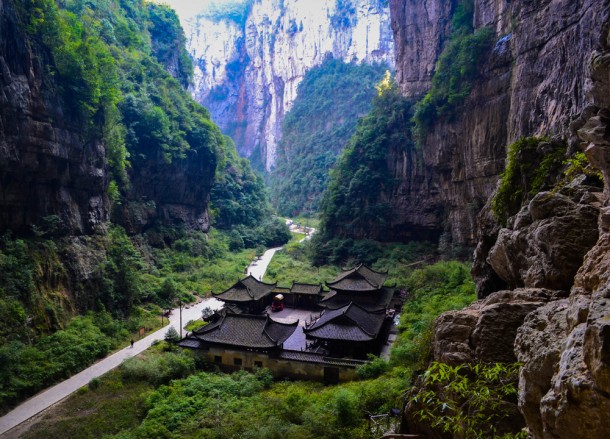 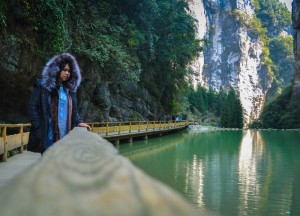 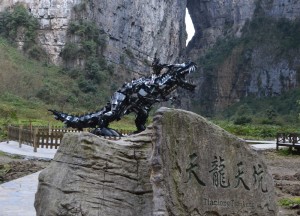 Leaving Wulong Karst we follow the same route on the resort bus back to the entrance building, then into a minivan which we find waiting on the road out front. The plan was to then jump onto the next possible bus to Chongqing but, arriving to the bus terminal at around 3.30pm, we find the next bus wasn’t until 6pm. We were happy to explore Wulong town and looking back it was one of the highlights. What I love about Wulong Town is that it’s in no way touristy. It’s just an average town, with average people, going about their average lives. It is different to the big cities and resorts which most tourists fail to see beyond. Authentic in local life, it has a nice enough riverside area, and there’s plenty of food and traditional street bustle. Having missed the bus completely we’d have been happy to stay the night with plenty of cheap hotels surrounding the station. In this scenario we’d likely have indulged in beers and barbecues on the street leading towards the riverside. Instead we are on the bus at 6pm and on our way back to Chongqing 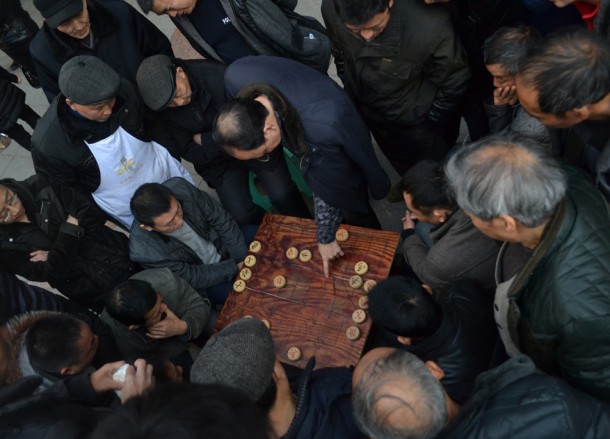 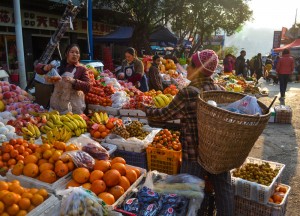 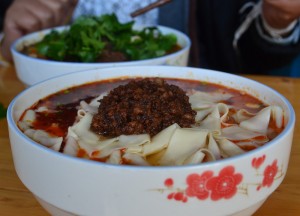 The bus leaves Wulong Town at 5.30pm, which was a little worrying. If we’d arrived at 6.00pm to the station, as printed on our tickets, we would likely have been staying the night in Wulong. Instead we leave at 5.30pm to arrive at Chongqing around 8.00pm. The journey takes just 2 hours 30 minutes; significantly quicker, with less traffic at night. Leaving Wulong we drive through which brings some unforgettable scenes over surrounding hills and valleys. Unfortunately the camera died around this point so you will have to take our word for it. As the night gets darker so do the roads with no street lighting along the route, which can be a little unnerving at times. Arriving to Chongqing however makes it worthwhile where the city skylines are some of the best I’ve seen. The views are similar to the riverside pictured below (right), only better. 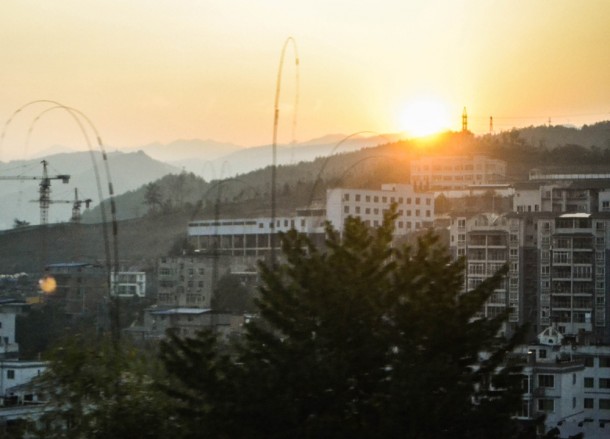 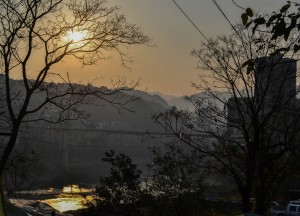 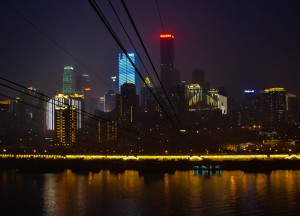