Coming from Northern Ireland I know first hand how political situations can be over exaggerated in international press. Having lived close to 30 years in Northern Ireland, a seemingly war-torn country, I can’t remember once seeing riots, violence or even heated protest. Yet every year over the 12th of July parades in Belfast my entire country is set on fire and torn apart. This doesn’t really happen but it is how the situation is portrayed in the press. In Northern Ireland the rioting only comes from a select few and only on one, maybe two streets of the country. Yet the entire country is shown to be on the brink of civil war. Now every year I watch from Thailand on CNN … “Crazy? My country’s on fire? Glad I’m not there”… but of course it is no different than ever before. Probably better. This is now how Thailand feels as I tune every day to international media and find the streets next to me portrayed as a potential war zone. My family and friends message to make sure I’m safe. It’s all a little absurd. I’ve lived through regular protests in Bangkok (pictured below) and have barely noticed any set backs in my daily life. In the situation of the Bangkok coup there are differences however. The protests are definitely smaller and less and there is a curfew now enforced. The Current Curfew (Midnight – 4am)

If anything the curfew has been great to me. There’s less obligation to be social, it has stopped me boozing through the wee hours and it saves me from snack runs to the 7/11 after midnight. It was exciting to watch my local 7/11 shut its doors for the first time and my productivity levels were no doubt bettered during the half hour of “Facebook Down”. On top of this I’ve been making more use of the valuable hours of the day and doing things I don’t normally do such as boozing earlier. So I haven’t yet got my “with army selfie” as they tend to only follow the protesters and I generally avoid them. As rebels we did once break curfew during a late night at RCA. We find no trouble flagging  a taxi and we weren’t arrested and taken to a safe house…. Things are fine. 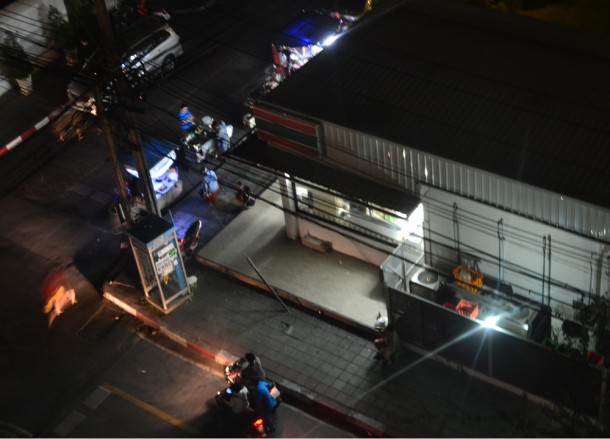 I of course like to be optimistic but in honesty I don’t see things getting worse in Bangkok. While originally there were threats against the coup this may have been more of a deterrent in the past than a promise for the future. To date the pro-government leaders have agreed to work with the army and to push through to the new election. Now that the coup has happened any fight can benefit no side of the divide and will only hold back progress and prolong reform, elections and democracy. The former Pheu Thai government obviously want elections asap to regain the power which they struggled to hold as a caretaker government. The anti-government side also get the reform which they have shouted for the past 6+ months. No doubt the situation before the coup was more dangerous with rising tensions and violence escalating between rival sides of the divide. With no compromise the army stepping has defused this tension. The political deadlock is ended and neither side lose face through compromise. Of course there will be opposition to the coup but the time of Bangkok being “dangerous for tourism” is far from near. It is however best to avoid Ratchaprasong (Siam), Victory Monument and Asoke intersections and only visit them on passing. Outside Bangkok…. I don’t think there is any worry whatsoever. The best guide for current protests is Richard Barrow on Twitter).