We’ve passed Sendai Station a number times in transit but, until now, we had never seen further than the bill board backdrop of the area. But the area had intrigued me and (due to a slight change in itinerary) we stayed a night in the Sendai Station area. On the day we actually start in Tokyo beginning the morning with sumo practice at the Ryogoku stadium, before we jumped onto the JR Shinkansen trains, packed with the Golden Week exodus, as we travel to Sendai Station. We arrive to Sendai station at 7pm and would leave for our next destination (back through Tokyo) the following morning at 06:40am. It does sound a bit like a pointless journey, as it takes near two hours each way, but I feel it was worthwhile. On arrival to Sendai Station we walk out to elevated platforms and walkways which connect to gleaming malls and entertainment arcades. We check into our ‘salaryman hotel’ nearby (Sendai Station hotels here) before heading out to explore the nearby area. For this short stay we have no plans of going further so we are always within a stone’s throw from the main Sendai station. 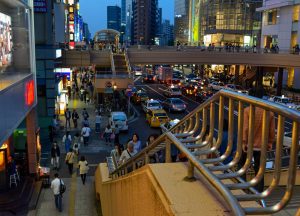 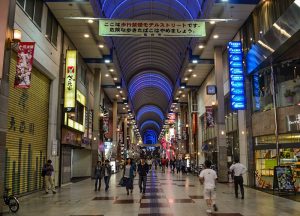 I spend the first hour people watching and drinking Kirin beers “Brewed for Good Times” on the outside elevated mezzanine floor while Fanfan disappears into surrounding malls as she shops for ‘essentials’. The area is vast but still busy with Golden Week revellers and, when Fanfan returns we go to explore the arcades. Sendai is pretty much void of tourists and unlike Kyoto, or other touristy destinations, there is almost no English translations on anything. It was the perfect opportunity to get lost in weirdness and we make the most of it. This starts with the arcades where Fanfan wastes too much money on UFO catchers (claw crane machines) before I am forced to drag her away “but they’re sooo cute”. So we then find ourselves drawn to the endless stretches of pinball arcades which are chock-full of salarymen. These are known as Pachinko Parlours and they are found all over Japan. They’re little more than a game of luck where metal balls bounce around in a machine before dropping into holes at the bottom of the screen. If the ball lands in the winning hole, the player then wins the ball. These balls will be collected and cashed-in for prizes of alcohol, toys or more-than-not tokens. The token option is mostly used as a loophole for gambling (which is otherwise illegal in Japan) and they are later swapped again for cash at shops outside the pachinko parlour. Normally we would call at more familiar ramen restaurants in the evening but continuing with the plan of getting lost we instead go for our first izakaya restaurant experience. Following a billboard display of sashimi we find ourselves taking an elevator to the 2nd floor corridors of the arcade where confusion and pointing ensues. As we pass through the hanging curtain dividers of the izakaya we are greeted in Japanese and ushered to a table for two which is located in a small side room. There are only two other tables occupied here but it is still loud and bustling with Japanese banter from other private rooms which are loosely enclosed with dividers. We decide to indulge in sashimi which is just raw fish or seafood. This part was in fact easy which I find a lot in Japan where there’s always plastic food replicas to point to, or big pictures on the menu. On this instance we point to a big picture of a sashimi set (1,290 Yen) and a 300ml bottle of the izakaya’s cheaper sake (650 Yen). Admittedly sashimi is a first for me and, while I’ve probably eaten my own weight in sushi through the years, the delicate raw fish flavours alone have never really tempted me. But when in Japan. 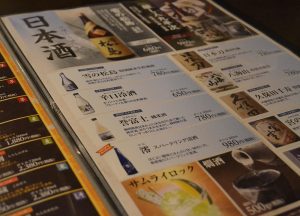 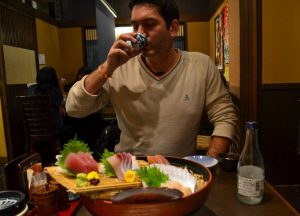 Admittedly the sashimi is delicious, better than expected, but I still tell myself on every bite “this salmon would be better smoked” or “this tuna would be better in a sandwich”. “I want wasabi”. But, as with sushi, I feel it will grow on me. I used to shudder at sushi but now it is one of my deepest cravings. But, as expected, the sashimi, didn’t fill us, so we order an extra set of sushi (730 Yen) to the table and continue to smother them joyously in soy and wasabi. In Japan this would probably be like eating marbled steaks with tomato ketchup. The final bill comes to around 3,370 Yen which includes an unexpected addition of 700 Yen (2 x 350 Yen). Then things become confusing again as we question the charge which we find to be a “Table Charge” (otooshi) which is apparently normal with many izakaya. For us they waive the charge and I feel guilty for my lack of understanding. So when we leave the izakaya the arcades are still busy with the Golden Week crowds but, given we have an early start in the morning, we call it a night. Yes, we did travel 700 km from Tokyo to Sendai, and back, to do little more than explore arcades, and eat raw fish. But I’d definitely do it again,