Wu is a simple, collective term, meaning to dance, but there is of course many different styles of dance, from the traditional to the bizarre. When in parks, dancing tends to be split into groups, each sharing their own set of loud speakers (shown above left) with variations of music and momentum. The local participants then dance in synchronicity. Often it will be the more proficient dancers leading at the front of the group (the best in the center) and the ranks behind will learn from those in the rows ahead. One of the common forms of dance would be Tiao Wu Jei or line dancing, which brings more traditional dance into routine. Ballroom dancing (below left) is also a common genre and then there’s the weird umbrella and scarf dance (below right), which I’m clueless to. While Tai Chi was originally developed as a defensive martial art, it is now more commonly practiced as a therapeutic exercise technique. The form of Tai Chi follows a series of slow, graceful postures and movements, each movement flowing, without pause, to the next. Tai Chi techniques are performed to achieve relaxation both physically and mentally and is a meditation, of sorts. It is said to be very good for health and it strengthens the heart and immune systems etc. Either way the beauty and grace of Tai Chi makes it perfect for relaxed people watching in the local parks in China. Tai Chi is again performed in synchronicity and follows the more proficient participants which lead at the front. 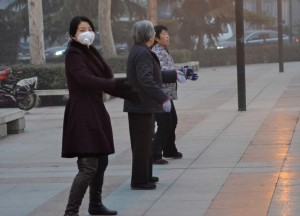 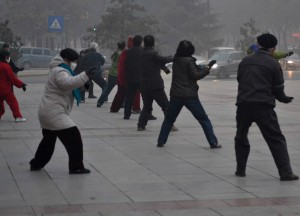 Wushu is the collective term for martial arts, and in China there are many of them (Kung Fu often interchangeable). Over centuries in China martial arts have developed with hundreds of different styles made distinctive through individual sets of techniques and ideas. Away from the defensive art of Tai Chi, the most common martial art in China’s parks, we find alternative attacking styles and more kick-ass options usually taken on by the men in the park. I remember once watching (like a coward) as a park cleaner holds off an ‘attacker’ who looked to be aggressively fighting over his brush. The park cleaner overpowers him and fights back. So it turns out the two men weren’t actually fighting, but were practicing martial arts and using strength to overpower the opposition. 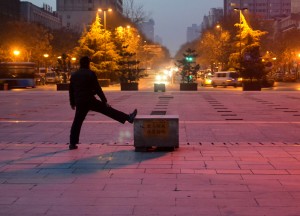 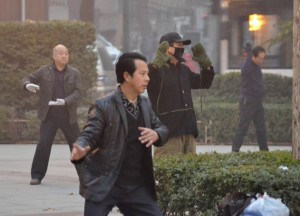 As with most martial arts Jian Wu started out as a military training exercise, which later evolved into dance, and then opera. Now it is probably more common as exercise in local parks in China. Often better known as ‘Tai Chi with swords’ the slow and graceful movements make this display in no way threatening. Jian (swords) in China are no longer used in combat and in the park they use more flexible replicas for ceremony and performances, with both tai-chi and wushu. Again, as all dance and martial arts go, the form will vary and movements will be at different speeds. While some focus on relaxation and flexibility, others will focus on speed and strength. Similar performances can be seen using broad swords, or even spears. While Jian Wu is often performed in groups of synchronicity, you may also find the occasional solo rendition. 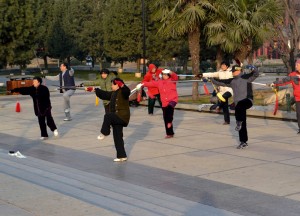 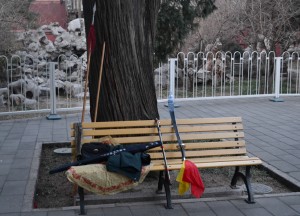 Taiji Rouliqiu has taken the teachings of Tai Chi and made it into a game. Not really a competitive game, but it does look fun all the same. So this Tai Chi inspired racquet and ball game is a newcomer to local parks in China and requires a pairing of two (or more) to get involved. The game involves the throwing, and receiving, of a sand filled ball from one player’s racquet to the other. It takes gentle movements to catch and cushion the ball softly on the racquet before quickly releasing it again to the next player. Back and forth. The sport focuses on cooperative thinking and in ways it reminds of a graceful interpretation of Jianzi (Chinese Hacky Sack), which may also be found in local parks in China. As expected this is becoming more popular with the younger generations of China, and is emerging as a national sport. Taiji Rouliqiu is also known as Tai Chi softball but, as a Brit, I will stick with tennis. 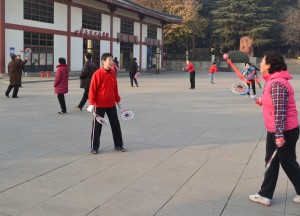 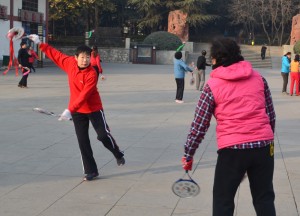 Xiangqi is a strategy board game played between two opponents which is surprisingly similar to the better known Chess of the west (hence Chinese Chess). The strategy and goal of Xiangqi are pretty much the same, focusing on capturing the General (King) using the lesser pieces. However the lesser pieces are different, movements are different, and a lot of rules are different. Probably the most noticeable difference however would be seen on the board as the Xiangqi pieces move along lines to intersections, instead of jumping between squares. One of China’s most popular pastimes Xiangqi is found not only in local parks in China, but at local squares, street corners, roadsides, anywhere really. Xiangqi is also competitive on a global scale with local clubs and societies worldwide. Check here for a simplified playbook. 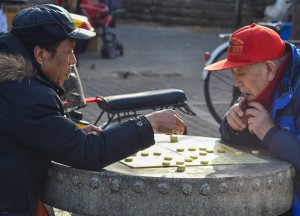 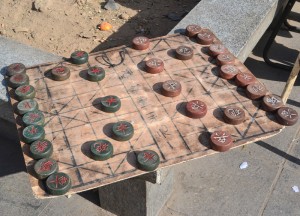 The visual art of calligraphy is the design and execution of lettering using a broad tip brush and the Chinese form of calligraphy distinguishes itself from other cultural arts with an emphasis in motion, and single brush strokes. The calligraphy form in China is also the basis of many others, such as Japanese calligraphy, which shares roots and basic writing style with Chinese calligraphy. While calligraphy in China maybe better known to visitors through the common art student calligraphy scam, I find the better place to find an authentication demonstration is in the local parks in China. Here locals will paint with water and large brushes, on even larger canvasses of stone and concrete. 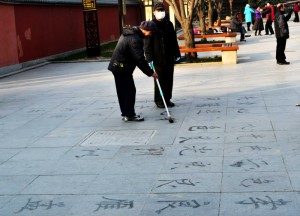 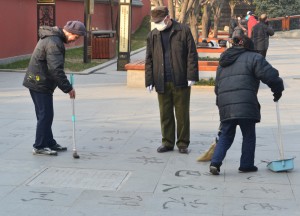 China is the birthplace of the kite and in ancient times, these simple bamboo and paper playthings, were in fact helpful in many application purposes; measuring distances, testing the wind, signaling and communication. The traditional shape of kites were Chapi-chapi styled, made with a simple, thin bamboo frame and a paper or silk covering. Tie together with thread. Daytime is the more popular time for kites in the local parks in China where enthusiasts turn up to do little more than fly their kite. However, you will also find kites to be popular in tourist areas where they are sold as easy-to-pocket souvenirs to take home. Souvenir kites are generally small, cute, multi-tiered kites as pictured below. In modern China kites now come in all record-breaking shapes and sizes and the sport is taken seriously through annual festivals such as the Weifang Kite Festival. 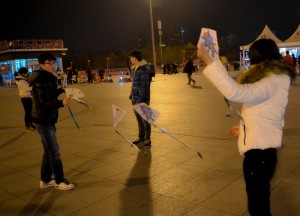 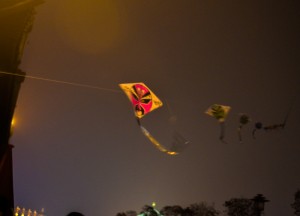 The sound of cracking whips is often a sure sign that you’re near a park, and while the sound may come simply from the cracking of giant whips (a common sport in itself) the more popular, and of course more fun activity would be the Tsa Lin Spinning Top, one of the oldest toys in human history. This seemingly bland children’s toy remains popular in China, not only for fun, but for competition as participants compete to spin tops for the longest, maybe play to knock over opponents, or spin through a series of obstacles. At local parks in China they don’t appear to be overly competitive, and just simply stand around, fapping their spinning tops, in hope that they don’t fall on their ass. Occasional you do find a more serious participant, whipping precisely at the axis, building speed and momentum, using longer whips and more challenging distances. Different sizes and different weights etc. 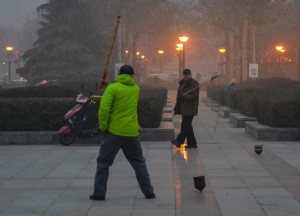 People watching is my personal favourite pastime at local parks in China, the lazy art of observing and admiring unique cultures and happenings of day-to-day park life. This can be done at any public place, and while it is considered a hobby to many, for most it is a subconscious activity they partake in everyday, without even realizing. Next to no skills are needed for people watching, other than eyes and possibly some discreet positioning. People watching can inspire creativity through arts such as photography, blog posts, or maybe a symphony. In a world consumed by technology it makes a healthy alternative to scrolling through crap on Facebook.