It has been a long time since I have written about blogging, and this is because I have really not been doing much over the past year. In fact I almost gave up last year, when Taiwan at the time, as my website was hacked and my traffic dropped by roughly a quarter. It wasn’t a bad thing to be honest as until then I had been obsessed with building my traffic, and my stats, and my rank, and when the hackers hit, I just kind of said “F**k it!”. Knowing that I could work my ass off for years, then just lose it all in a day, I just felt there was little point in worrying. So from then on, blogging became less serious, and my priorities shifted to other projects, like my upcoming book in rural Thailand. Meanwhile my stats never did recover and I only really published once, or so a month, to keep the website active. But my enthusiasm was defeated, and yesterday things just got worse. 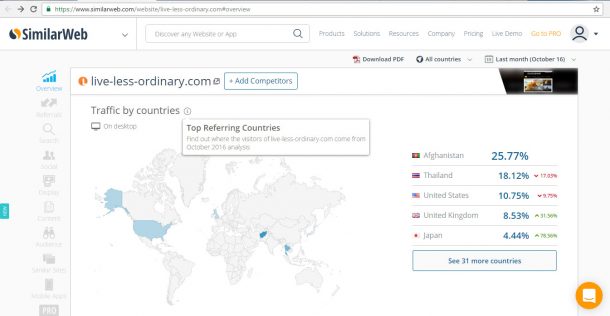 I never really sold sponsored posts on the website in the past, but since the hack, and my inevitable lack of caring, I began selling the odd one. If the pay was right. Given we traveled for almost a month straight this month, and are off again next week, and have a return trip to Japan soon after…. we really could use the added income. But potential sponsors have been dropping like flies, which I assumed was to do with the current market. At least until last week when I was on the verge of taking a handsome payment, only to be told last minute “So sorry but we just seeing geo of audience your blog and the most of the traffic in last 3 months came from Afghanistan. This country is not interesting for our event. Thank you so much for your time!” Afghanistan? Afghanistan??? I have no idea what she is talking about. The client, who pretty much hung up with contempt, didn’t have time for me, a scammer. Because, obviously, I had been paying for fake traffic through third-world click farms. But it wasn’t until four emails and a veiled threat of defamation where they finally send me the source of these lies. Similar Web. A web service that claims to predict the traffic of websites. Where predictions are obviously bordering on ridiculous. So I compare said results with my Google Analytics and Google Webmasters (below) and, instead of showing Afghanistan as my leading country, Afghanistan doesn’t rank in the top hundred. They’re not there. Yet, at the same time, the Southeast Asia and English speaking countries which I am known for, all rank top. 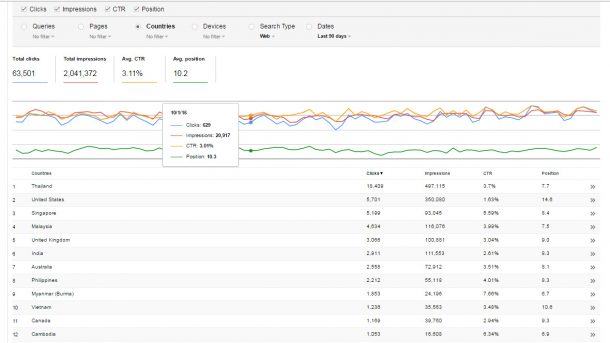 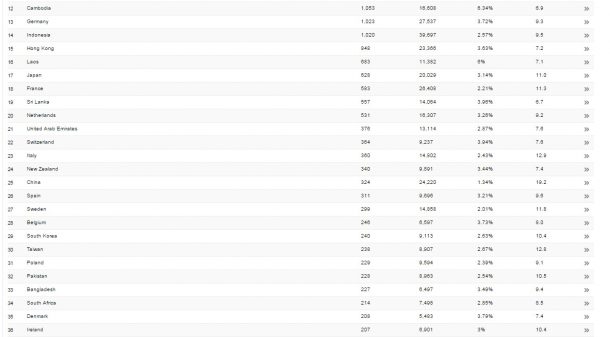 This isn’t so much a rant as it is a way to clear my name. To fight for my own credibility, because what annoys me more than the loss of revenues, which has been happening for God knows how long, but it was the loss of credibility given I have always made an effort to blog ethically. Without the shortcuts and black hat. But it just takes one whiff of dodgy dealings, and my name and website is marred for good. Because, with so many black-hat website and dodgy practices out there, and lack of transparency with these statistics, it is all too easy to pull the wool over people’s eyes. These official website stats are hidden from outsiders and are only available to the websites administrator, and Google. So this one wrong, and somewhat bewildering, statistic, could put my credibility down the drain. I know I wouldn’t deal with me. Why would I deal with a potentially dodgy dealer, when there are so many supposedly squeaky clean alternatives. There are other traffic predicting websites out there, like Alexa, which do show a more accurate standing of my stats (they’re still not perfect, but they’re not Afghanistan) but how do people know which one is real. Having more or less paid Facebook Advertising to ruin my Page with fake followers, I now have a dodgy website to match. It’s just really disheartening when you put so much effort into upholding good standing as a blogger, for what reward?

3 thoughts on “Ruined by Traffic Predictions”